Last year fly-tipping hit a 10-year high, a problem which has only been amplified during lockdown. Brighton Council have reported that fly-tipping has more than doubled during the pandemic, with household waste and recycling sites closed in late March and reopened with reduced capacity. Sadly, this is not a stand-alone instance, with many councils across the UK reporting increases in fly-tipping and side waste in 2020.

We tend to think that rogue commercial operators disposing of hazardous waste irresponsibly as being the main culprits of fly-tipping, but a surprising proportion of fly-tipped material is actually household waste.

On estates and in flatted accommodation fly-tipping, side waste, overfilled bins and contaminated recycling can be costly problems for landlords. Contractors who collect refuse and recyclables are not usually obliged to take contaminated or overfilled bins, bulky items, fly-tipping or waste that has fallen on the floor, which leads to unnecessary waste removal costs.

But why do residents fly-tip household waste when bins are provided?

With the UK is using more bins per household. Reduced collection frequencies and added recycling streams increase the number of bins needed. Modern lifestyles further lead to greater household refuse. Covid has massively increased the volumes of refuse and recycling due to changes in consumer habits. The disposal of cardboard and other packaging materials has risen from an increase in online purchasing, a trend which will probably not reverse.

Many estates simply do not have adequate bin storage facilities to cope with the influx in waste. Insufficient bins, poor location of the storage facility and poor design are all key contributing factors which can attract fly-tippers.

Fly-tippers usually look for untidy, unloved areas in order to reduce the risk of detection. Fly-tipping is not always large amounts of waste – at the lower end of the scale, just a few bags of household waste in another property’s bin area is still fly-tipping.

Side waste can have the same appearance as fly-tipping. This is where rubbish is left in the area of the bins, but not in the bins. It often starts with well-meaning users who are either unable or disinclined to lift bin lids, or simply that bins are overflowing as they are not the correct capacity and refuse bags are unable to fit.

Individual items left on the floor can quickly multiply, because users assume that the bin is full and a costly clean-up is soon required. This in turn can lead to fly-tipping as the refuse amounts.

Furthermore, in older housing environments bin stores are often synonymous with bad odours, litter and vermin. They can also sadly become hotspots for antisocial behaviour. These factors discourage residents from entering and using bin stores, which can create side waste and fly-tipping. 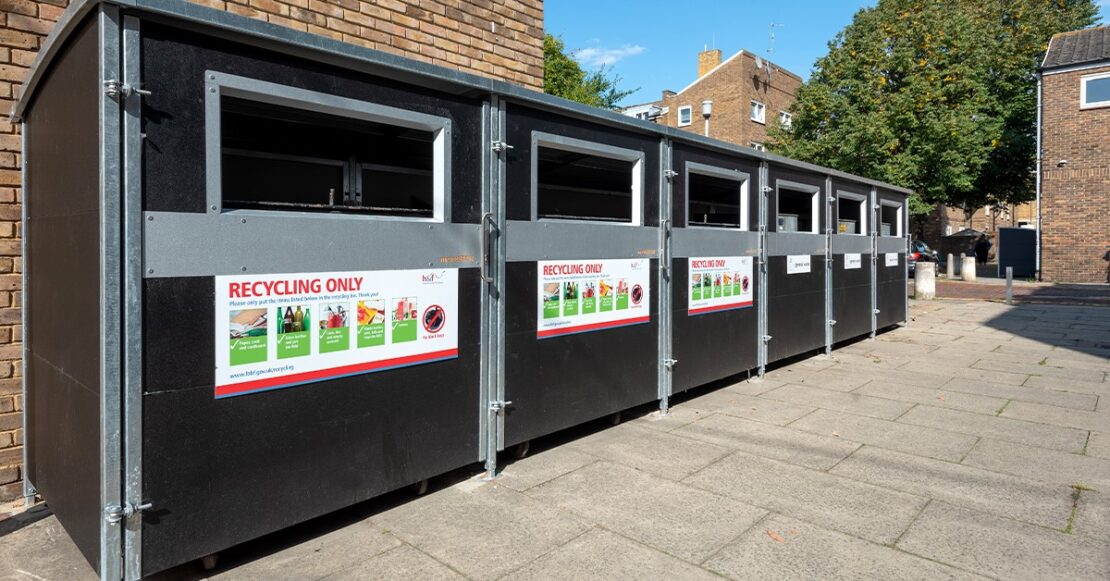 metroSTOR’s waste and recycling bin storage products improve environments through attractive designs, visually enhancing the area and removing a key contributing factor to side waste and fly-tipping. Our team of specialists can help you to rationalise bin counts and enclose these within metroSTOR bin storage areas, visually transforming your neighbourhoods and creating communal facilities that residents can take pride in.

The attractive design allows for bins to be stored in accessible locations that previously may have been overlooked, such as next to entrances and in the front of properties. This has been proven to actively discourage side waste and fly-tipping.

All bins have easy-to-use designs with clear instruction, which hold the correct capacity and remove the need for a bin-lid, making it as easy as possible for residents to use bins correctly. They also are also designed to help to eliminate the issue of overflowing bins.

Having removed the root causes of fly-tipping by ensuring that the appropriate storage capacity exists in accessible locations, any persistent drive-by offenders can then be eliminated much more effectively using redeployable CCTV and fixed penalty notices.