Keeping up with the rise of e-bikes

The recent boom in sales of electric bikes – or e-bikes – means that it is no longer such a surprise when someone comes gliding past you on one while you’re puffing away using traditional pedal power. And there’s no sign that this rise in popularity of e-bikes will slow down, which means that the rest of us need to up our game to keep pace with them, in more ways than one.

According to an e-bike forecast by Halfords, 2019 has been the biggest year in history for e- bike sales in the UK, with around 50,000 to 60,000 sold. The increase in popularity has been put down to more awareness of what an e-bike actually is and a wider range of options, from the entry-level up to top-of-the-range e-bikes with longer lasting batteries and high-performance frames and components.

In 2020, Halfords expects e-bike sales to increase “in a big way”. The growth in sales over the last few years as well as in 2019 points towards a very significant 30% increase in e-bike sales. Looking further ahead over the next decade, factors such as the government’s plan to ban the sale of new petrol and diesel cars by the end of the 2020s and pressure on local authorities to create more cycling routes could play a huge role in the way the UK approaches cycling. This move towards electrification, along with much stricter pollution rules within towns and cities, could see bikes becoming a key mode of transportation. 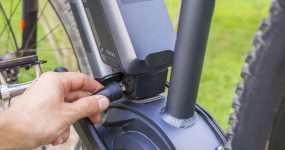 In the UK, we’re still well behind famously bike-friendly countries such as the Netherlands in terms of infrastructure and culture, but we are slowly putting improvements in place to make cycling more favourable. This ranges from developing dedicated, protected bike lanes in traffic-heavy cities to e-bike hire schemes in London.

Alongside this ever-increasing popularity of e-bikes, we are proud to be able to say that the metroSTOR range of storage units is also evolving to fit the needs of users even better than before.

For example, a charging facility is now available for e-bikes in our cycle parking solutions. This means that an integrated e-bike charging system can now be specified on the individual cycle lockers (PCL), modular cycle units (PCM) and also the cycle storage hub (PCH).

Here at metroSTOR we support any changes that will help to increase the use of bikes – of any sort – on roads in the UK. Urban congestion is a major problem in many cities and bikes have the potential to be a part of the solution to this. E-bikes can also offer increased mobility for people who might not be able (or want) to ride a standard bike. Any move that encourages an active lifestyle and also reduces the number of cars on our busy roads is to be applauded.