The UK social housing sector’s Chief Executive of the Year has been named as Chan Kataria of emh group. The announcement was delivered by metroSTOR […]

The UK social housing sector’s Chief Executive of the Year has been named as Chan Kataria of emh group.

The announcement was delivered by metroSTOR Communication’s Manager Simon Dolby in front of 600 guests from the social housing sector at the annual 24housing Awards. 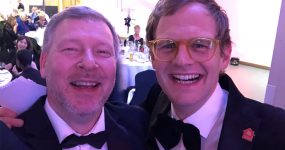 The evening’s host, TV comedian Mark Dolan, named 10 of the sector’s CEOs as those shortlisted by the judging panel. Paul Hackett, CEO of Optivo, was highly commended.

The judging panel praised Chan for turning emh into a 20,000-home sector-leading organisation with a £110 turnover and a reputation for quality mentoring. His approach in blending social values with commerciality has paid off, with emh selected as one of Homes England’s first wave partners.

Simon Dolby told guests how proud metroSTOR was to support the key category of CEO of the Year and praised Chan for his dedication and drive within emh group.

Simon said: “Since being awarded the OBE in 2017, Chan has continued to influence the sector being named a top ten Power Player in the 24housing list of 2018 and now siting as regional chair of the Chief Executives Forum of the National Housing Federation. He thoroughly deserves his titles of CEO of the Year.”